A successful Canadian architect once told me, as he described his perception of the ‘uninspired’ buildings of the University of North Dakota in Grand Forks,  “People may not learn calculus, or English, or engineering any better in a beautiful building, but they learn about beautiful buildings.”

Several years ago I toured the Pope Leighey House in Alexandria, Virginia, with a friend, and my daughter, Molly.  It was designed by Frank Lloyd Wright (FLW) in the 1940s, for a editor of a Washington DC newspaper.  It was later moved to Alexandria, because it was right in the middle of the planned highway 66.

It's a curious, unique little house, full of features I wish had caught on.  But FLW struggled with finances his whole life, so he never released his house designs to the general public.  He believed each home should be designed specifically for it's site.

Yet he thought hallways were just-bearable necessities, so he made them no wider than a Pullman car aisle (about 36 inches).  A narrow band of clerestory windows circle the Pope Leighley house, visually lifting the low, seven foot high ceilings with light, as well as making the whole house look bigger and more interesting.

Wright ‘s ideal must have been T.V. dinners, for the kitchen’s the size of a postage stamp.  But all the cupboard doors open away from the narrow but tall window, which is almost of clerestory dimensions, allowing light to reach far into the room, for maximum daytime illumination.  Carved wooden ‘screens define the house's actual clerestory windows, creating a unifying overall design and lovely light patterns. There’s lots of built-ins, from the dinette set to dressers. It’s a fun house to imagine living in.


Several years ago, my husband and I drove through Cloquet, Minnesota.  It's a small town in northeast Minnesota, near Duluth.  It's home to the only gas station ever built from Wright's designs.  You don't need to ask where it is, either, for as soon as you see it, you know.  It was built in 1956, shortly after he completed  a home for R.W. Lindholm, also in Cloquet.  Wright suggested he create a landmark building for his client's service station business.

The design was taken from Wright’s 1932 Broadacre City suburban model with an iconic cantilevered roof, pointing North.  It has a second story lounge and there’s even an infinity of mirrors in the ladies' restroom!  The only other place I’ve seen that fun house feature was in the 1929 fabulous Fox movie palace in St. Louis. 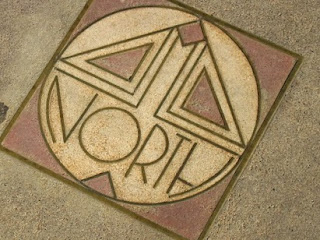 From it’s inception it was a Phillips 66 station but after that company pulled out of Minnesota, it’s become a Spur station.  It’s constructed of cement block, glass, steel and cypress wood.  For many years it was down-at-heel, but in honor of it’s 50th anniversary in 2006, $150,000 was invested in sprucing up.

Most summers we drive through Wisconsin, but never with enough time to stop and visit Taliesin, Wright’s first planned architectural community.  This autumn we did just that!  There were mainly older people visiting.  When I was growing up in the 1960s Frank Lloyd Wright was a major celebrity as well as justifiably influential architect.  Most Millennials have probably-sadly-never heard of him.

Reminds me of that 1970s Simon and Garfunkel song:


So long, Frank Lloyd Wright
I can't believe your song is gone so soon
I barely learned the tune
So soon
So soon 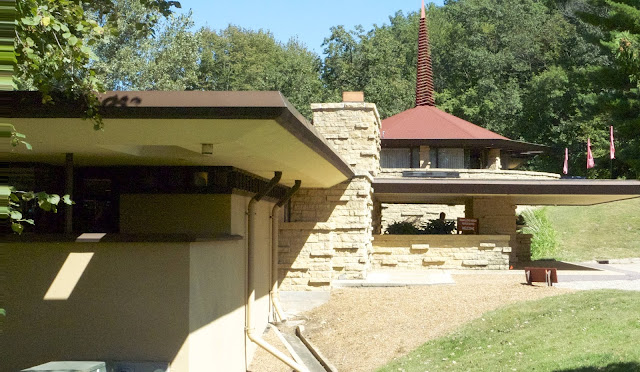 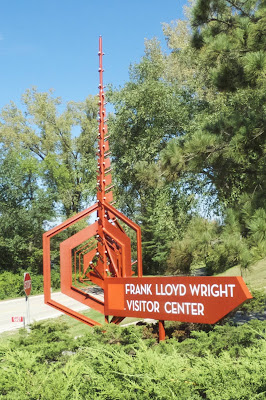